On a hot afternoon day a business man driving a brand new Lincoln Continental had a blowout on a frontage road just west of Gallup, New Mexico. A younger Navajo man, hearing the trouble, jumped over the barbed wire fence that separated the two. He quickly helped replace the tire and sent the man on about his business. The man in the Lincoln Continental was my Grandfather Armand Ortega Sr, the other, the now renowned Navajo Jewelry Artist, Ira Custer.

Neither knew that years later they would be meeting consistently at the Historic El Rancho Hotel to discuss business.  On those visits they would sit at my grandfather’s coveted corner table and would converse in Navajo, while my grandfather chose his favorite pieces of jewelry. Their conversation eventually led them to remember the tire mishap of many years before. They would  learn that Ira’s father and my grandfather had been high school classmates. Their friendship lasted until my grandfather’s death in 2014.

I feel blessed that this friendship has now been passed on to me. I am honored to be the person Ira Custer and his family come to with their incredible art. Ira began showing his work at Ortega’s in 2011 after another Jewelry store on the Plaza closed its doors. Undaunted by this turn of events, he walked into Ortega’s and asked to speak with the manager. His skill  spoke for itself and he was immediately picked up as an artist. 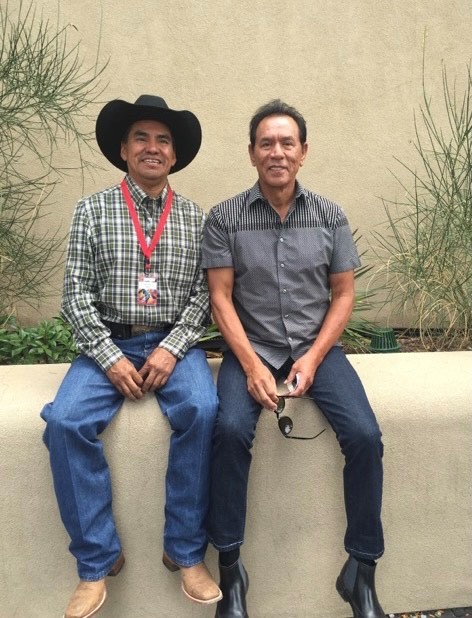 Having made jewelry since his childhood, Ira is a tufa jewelry master. He learned the trade from his parents Bennie and Emily, both born into silversmithing families. 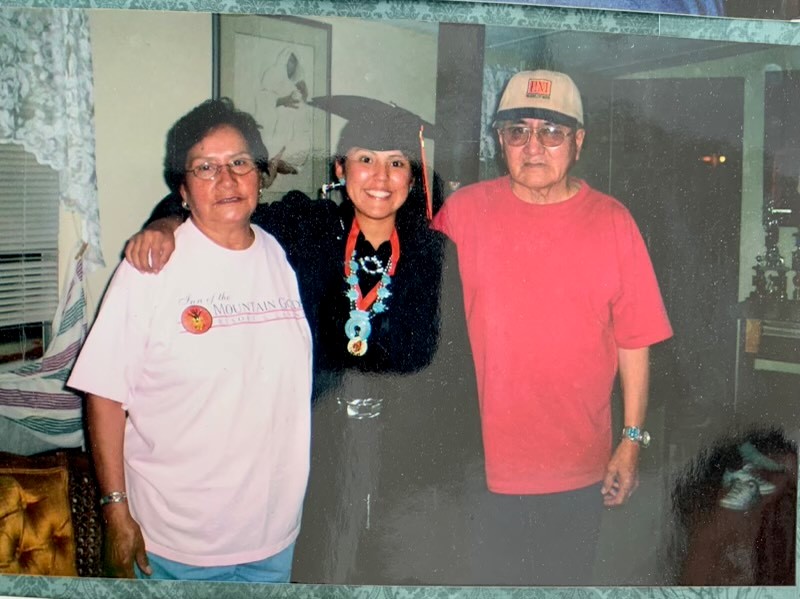 Ira's Apache grandfather was known for his lovely concho belts and his Navajo grandmother was a talented Silversmith. “I was really interested.” he remembers, “I used to watch dad and grandpa. I’d be out there tinkering around and watching.” At nice years old he “threw his first tufa stone” with the help of his father. “I didn’t know it was tufa at the time,” he recalls “ just a white stone. [dad] explained to me that it was volcanic rock that could withstand heat. He helped me solder and put on the bale.” The result was a cross pendant that he sold to a small store in old town Albuquerque. For many years he continued to enjoy helping his dad.

Although he does not know what happened to that cross pendant or who has it now, he has continued to use the cross in dramatic and elegant ways in his jewelry. 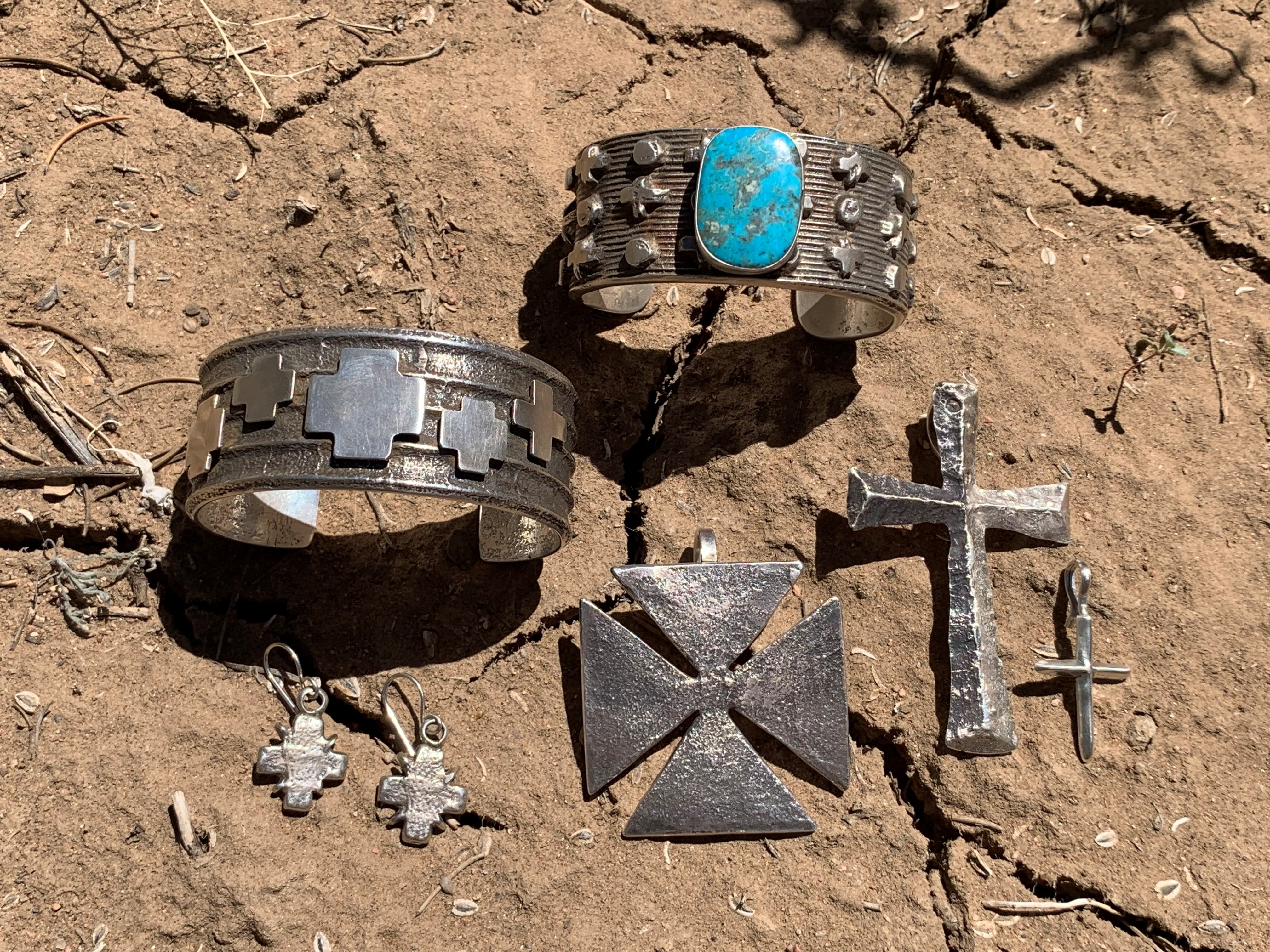 All the pieces above are new lovely items he has recently brought in.

But tufa casting almost became a lost art in his family. While he was in high school an economic crash forced his family to seek out other means of income. Ira took a job in a tire store. (probably the reason he was so quick at changing my grandfather’s tire.)  Luckily about 36 years ago, he found himself picking up jewelry crafting again. He gradually perfected his designs. At first he began with sand casting but later switched to Tufa. Now he gets Tufa from the reservation and often trades others for good tufa pieces they have found.

Carving a tufa stone requires diligence, and perfection. Often the tufa mold will only last one time before it breaks and is no longer usable. One example of this is the mold he used to make this Incredible Bear buckle on this Unique Sterling Silver concho belt. 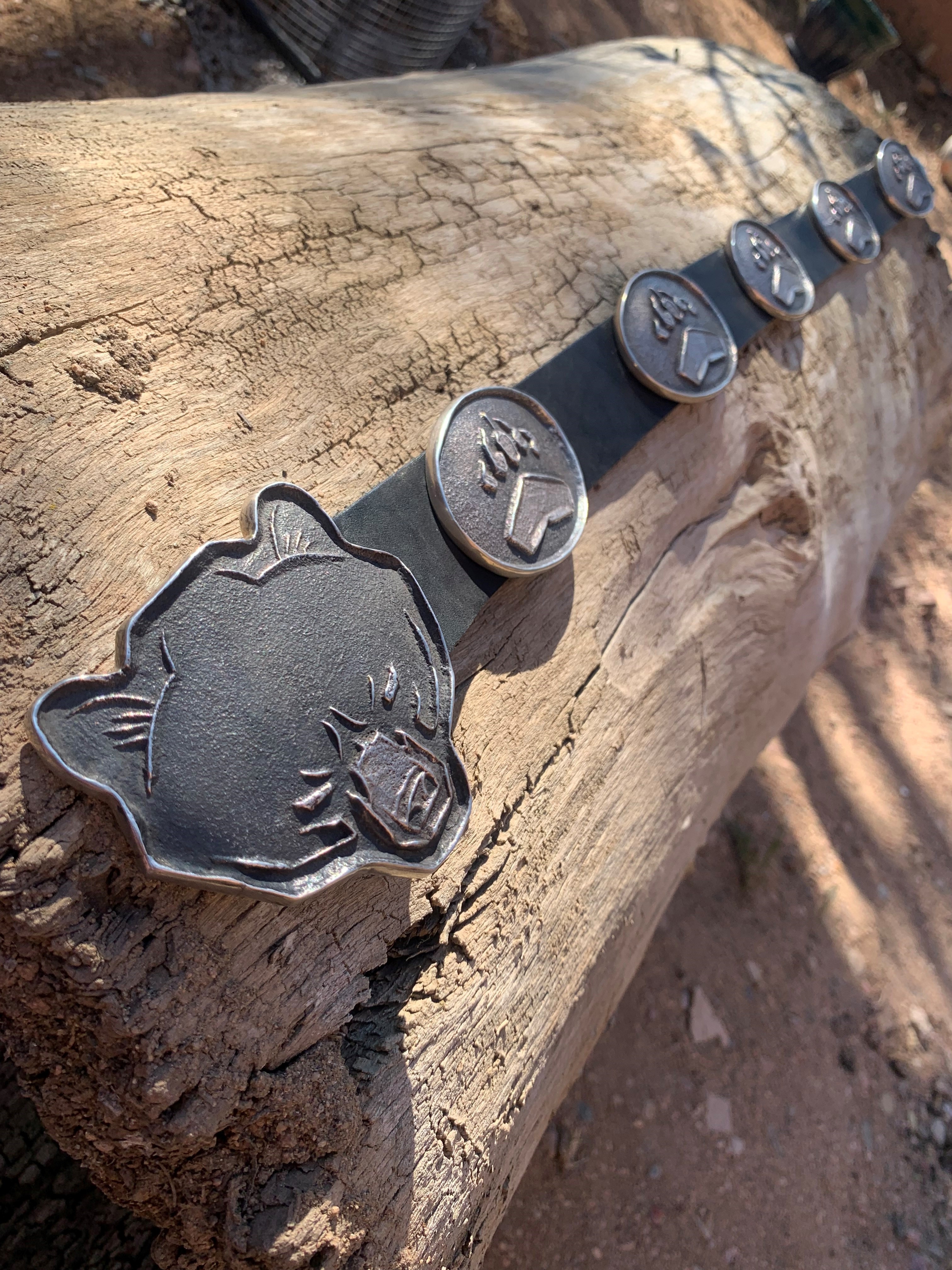 This one of a kind belt also features eight bear paw print conchos. Ira hopes to encourage strength and stamina with his bear motif. He employs it in many of his creations.
He also employs The Universe Warrior Maiden to symbolize Strength and Protection. 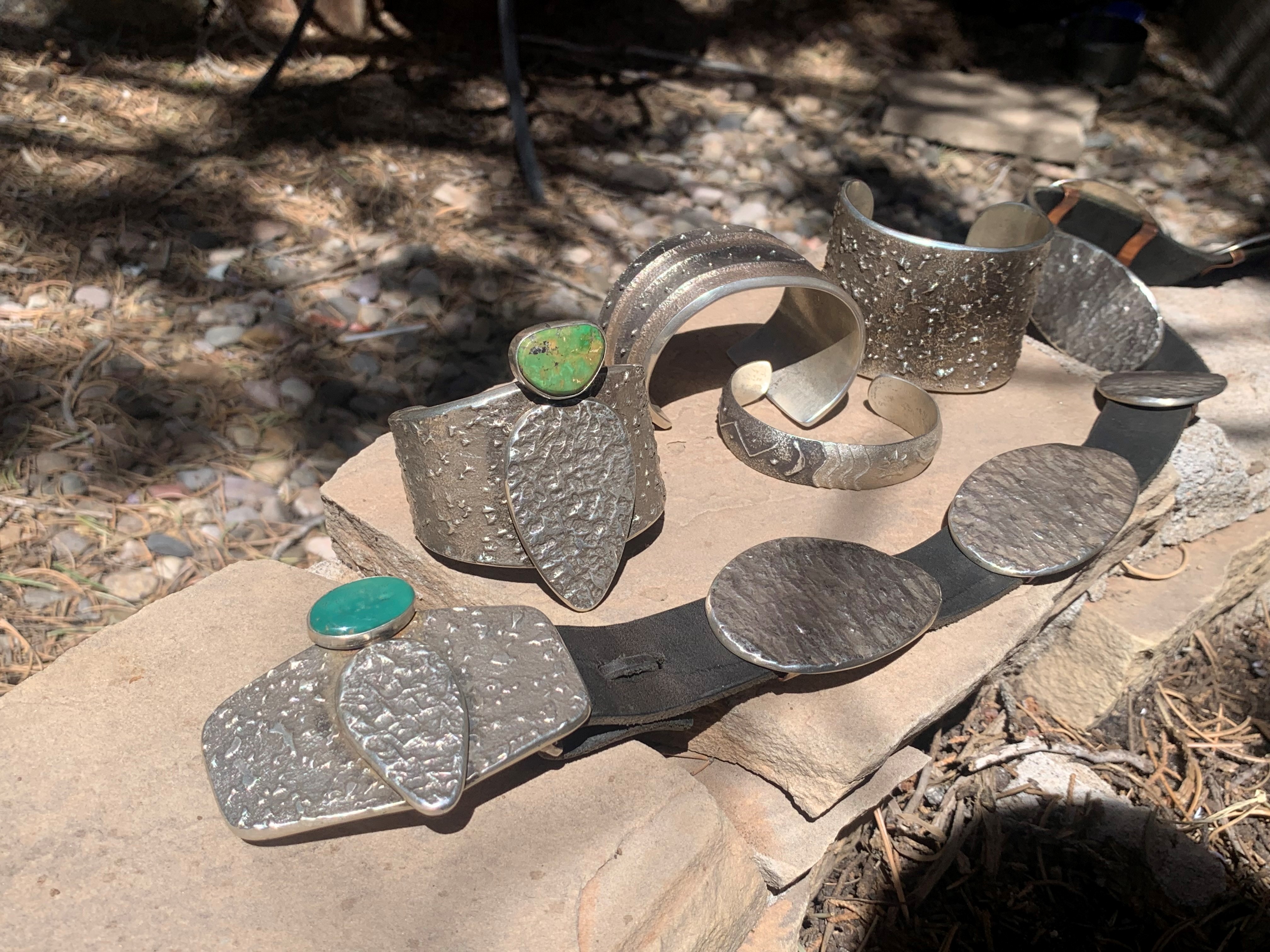 On the buckle of this belt, Ira placed the Universe Warrior Maiden above a depiction of the universe itself. The arrow conchos along with the maiden, according to Ira, point the way toward protections, peace, strength and happiness. (Next to the belt, sits a matching  Universe Maiden cuff made from the same mold. Toward the back of the picture are other universe cuffs. The Striped Cuff and the two colored cuffs are both representations of day and night. An unadorned though still elegant universe cuff sits in the back.)

In his designs he often uses arrows to point the way of peace and happiness. 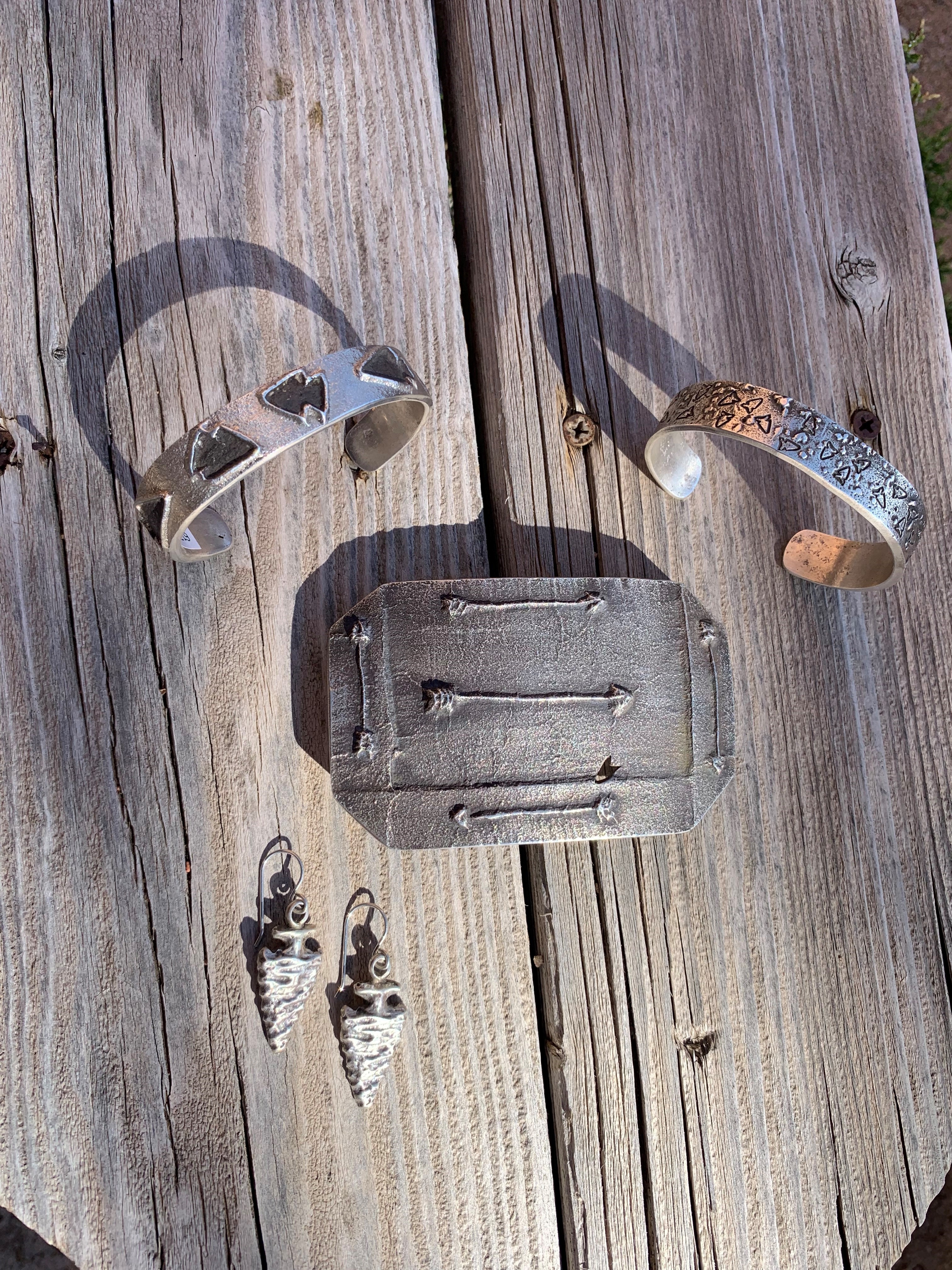 The arrows on these pieces are “male arrows with the pointy tips” as opposed to “the female arrow with rounded edges” as found on the belt above. A particular favorite of his is the buckle with an unintentional hole that he says “allows the release of the spirit of freedom.”

Being sometimes strange and scary, the universe and our place in it often feels like a maze. For this reason, Ira designed calm flowing maze molds.” There are beautiful patterns in these mazes,” he tells me, that “lead to peace.” . 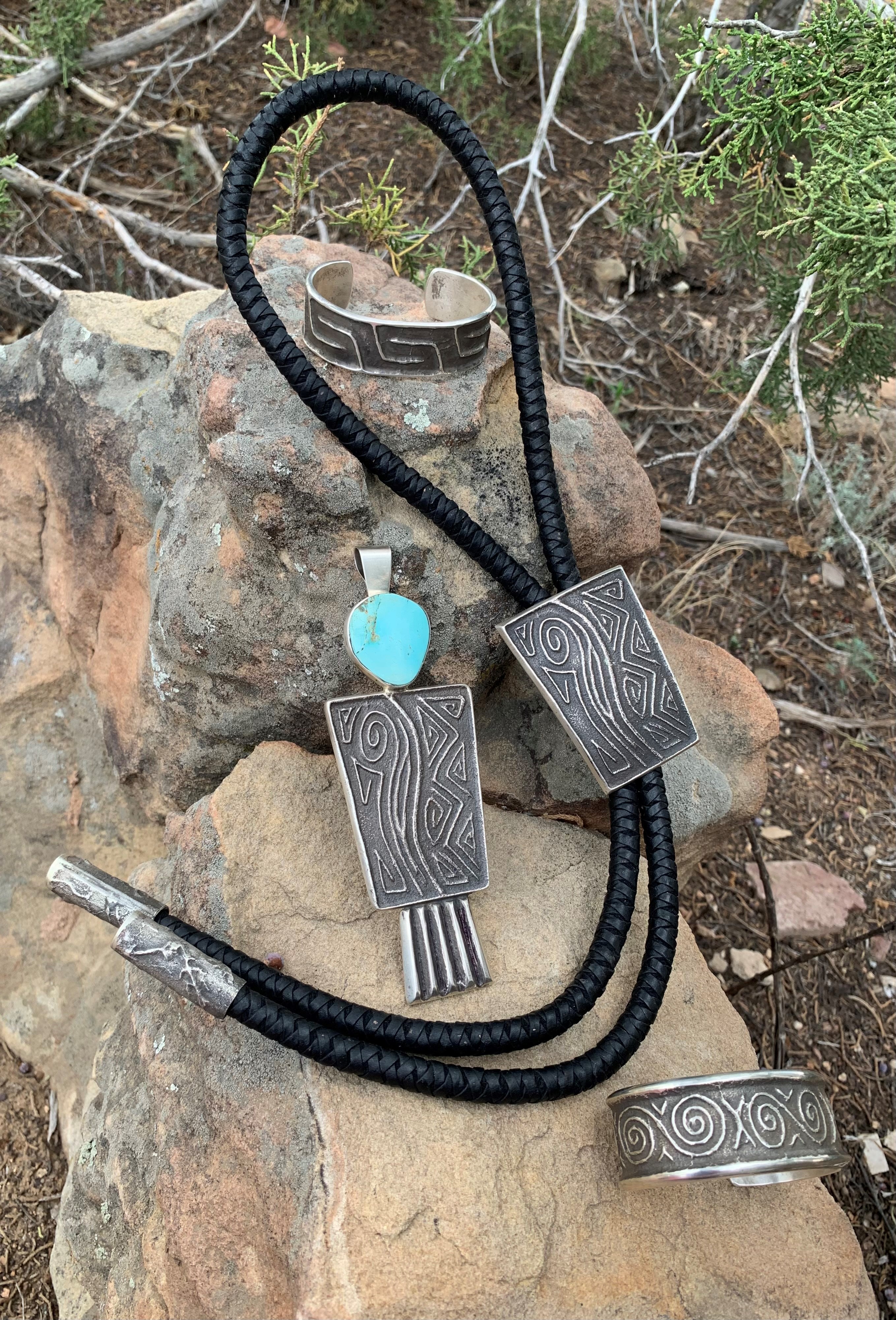 Here we have a Maze bolo on thick braided leather, a Maiden Maze pendant with kingman turquoise and simple maze cuffs.

Ira also incorporates very traditional pieces into his work as is the case with these simple naja pendants and amazing Cuffs. 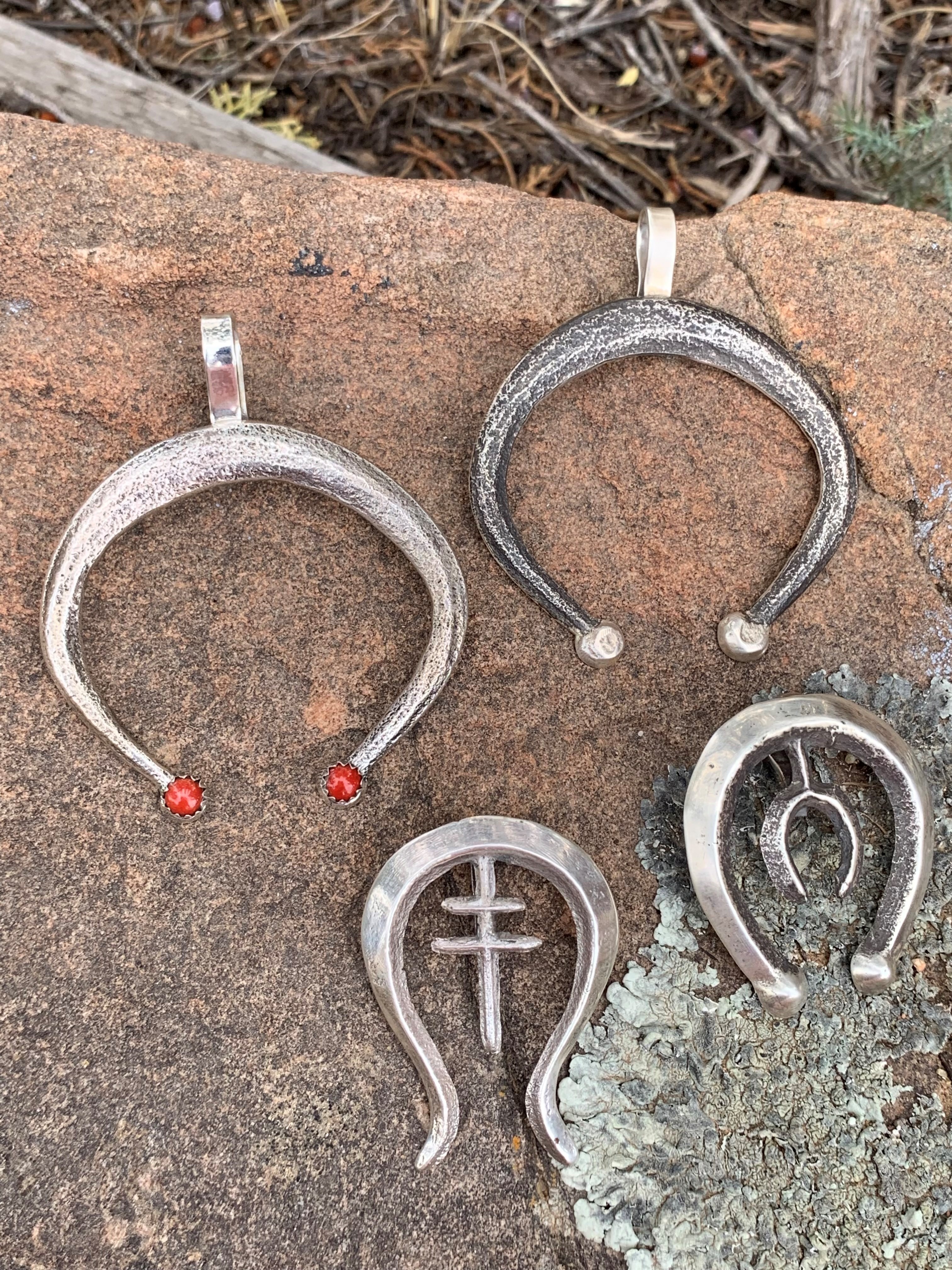 The sterling silver najas hook easily onto nearly all beads and chains. 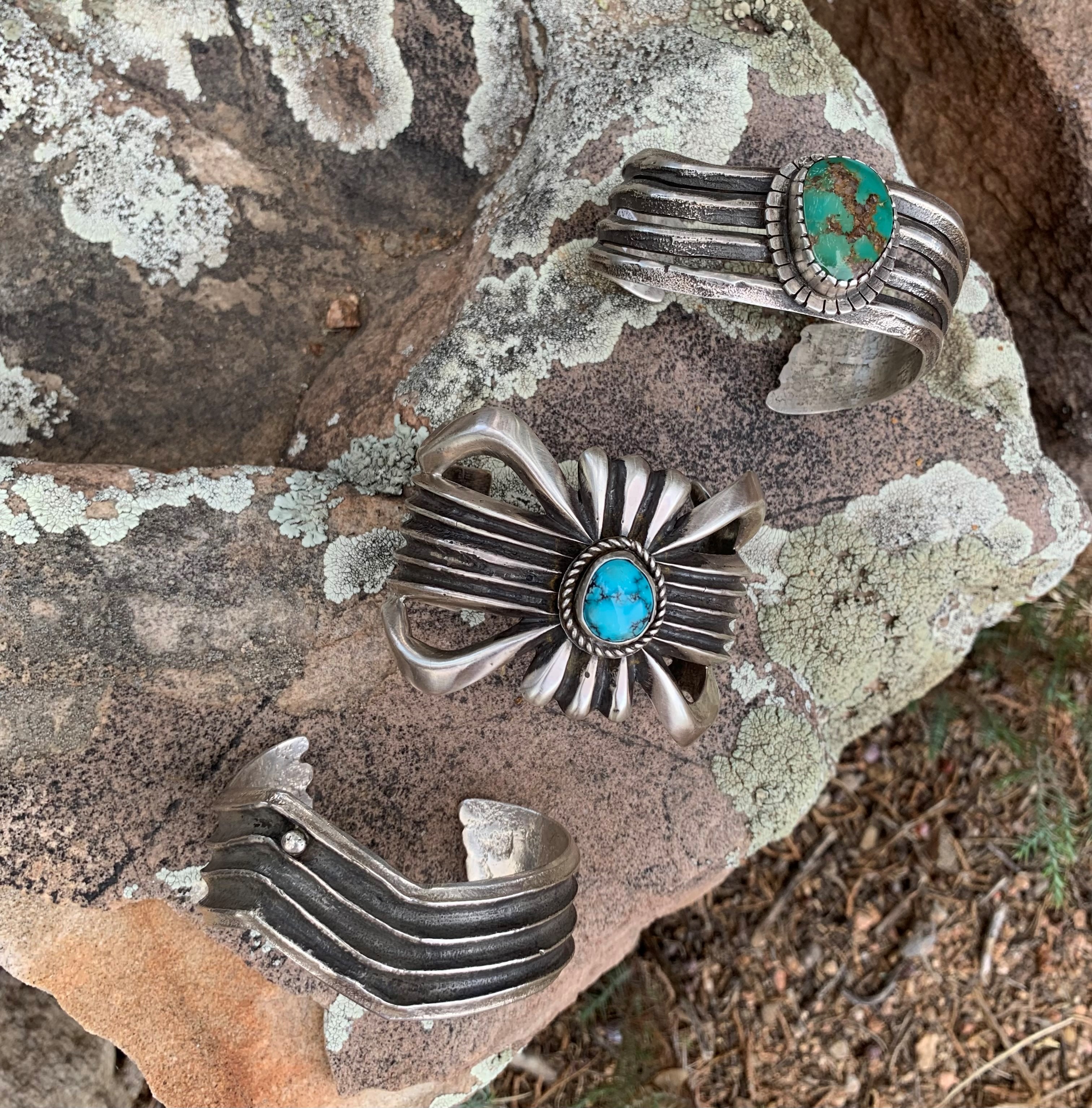 Ira Custer believes that jewelry making is an important tradition to uphold. He has taught his children the art. His daughter’s, Chenoa and Cheyenne are,amazing artists in their own right. Each creates exquisite cuffs, pendants, earrings and necklaces. Pendants seem to be Chenoa’s forte. 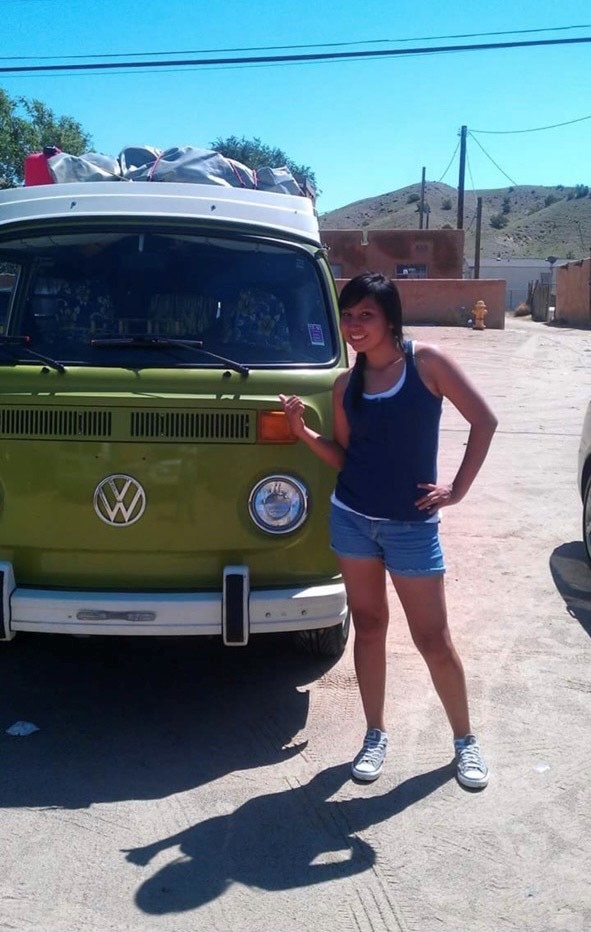 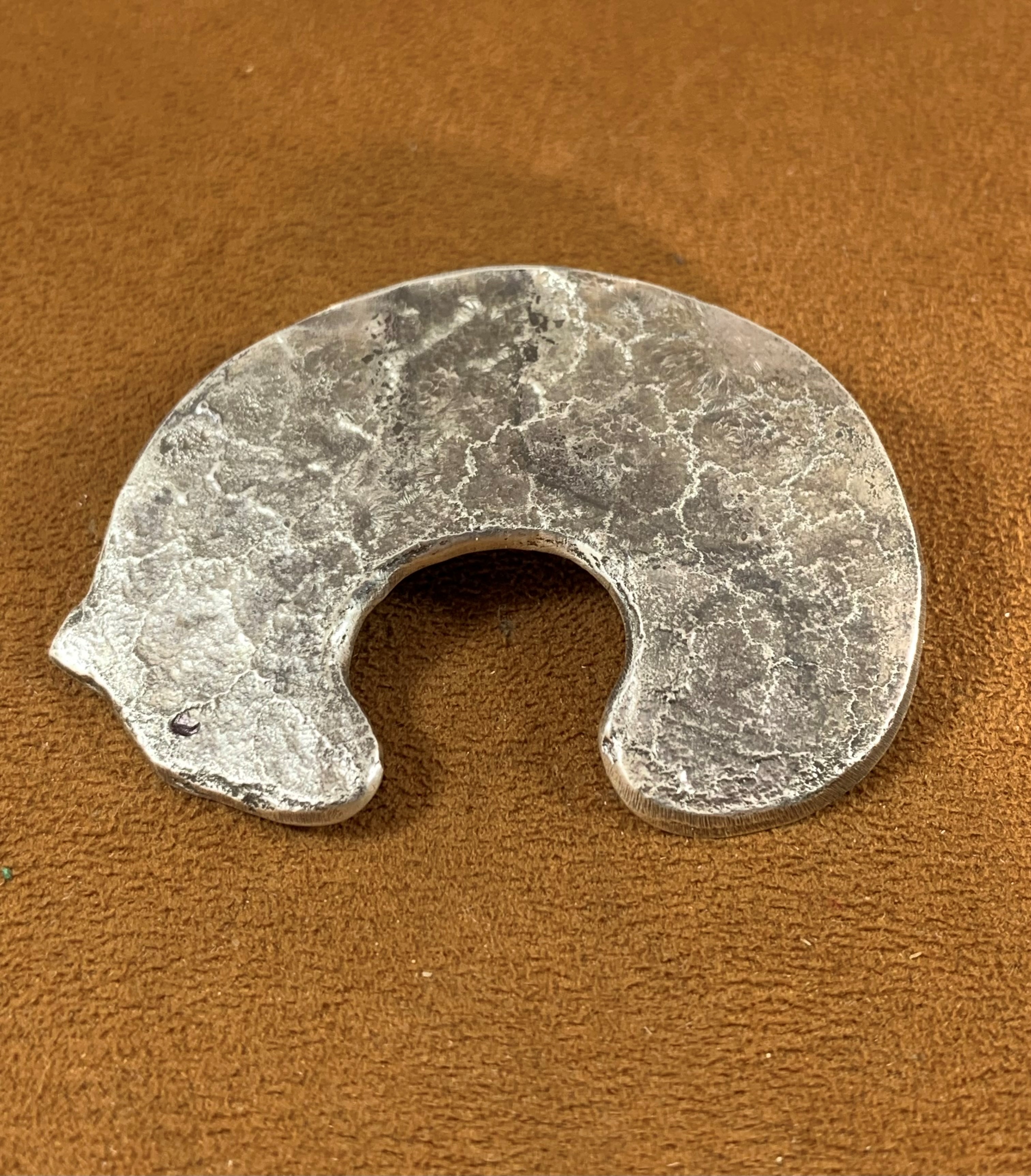 And this unique swirl pendant. 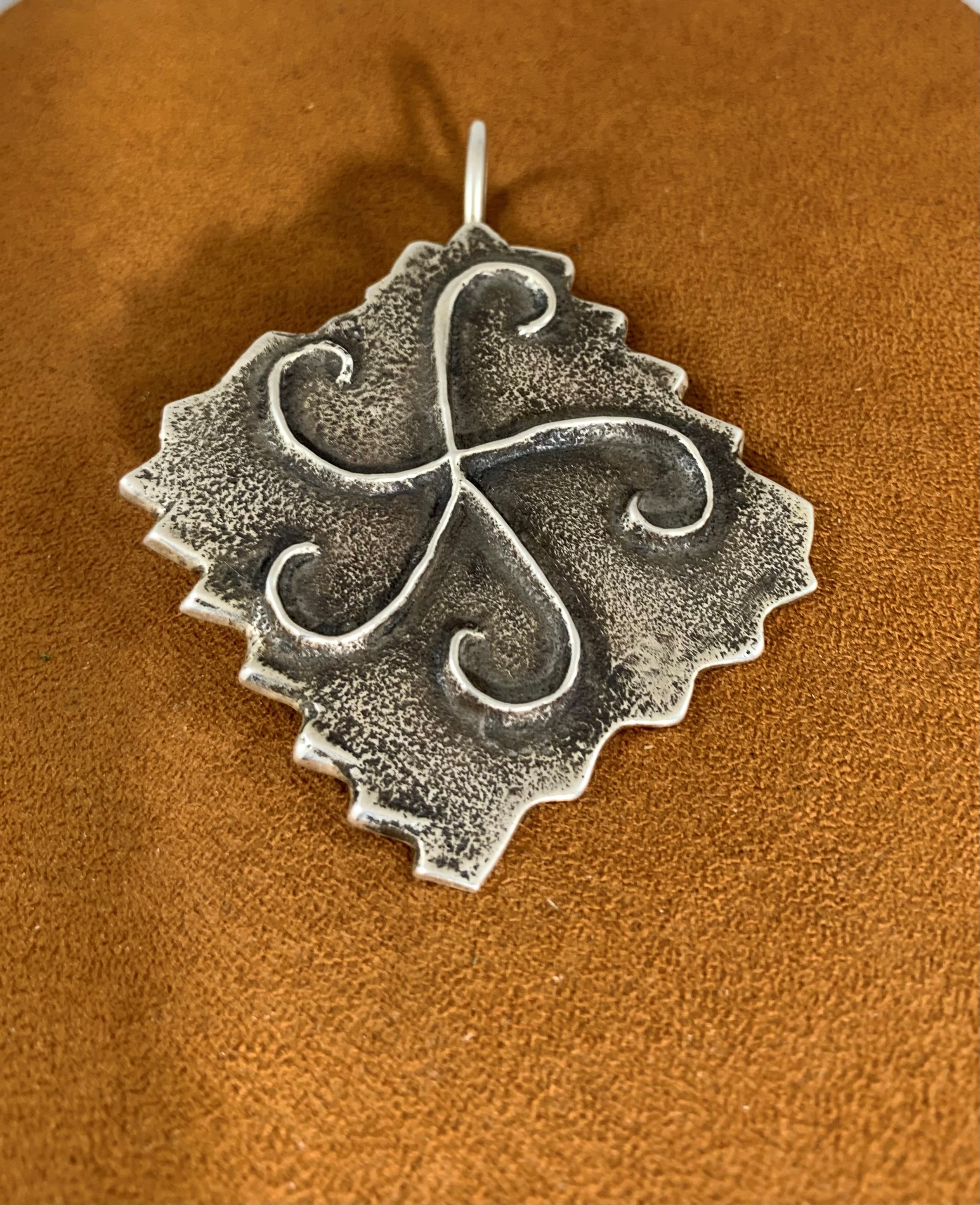 But she also masters traditional native designs like in this Elegant Rug Cuff. 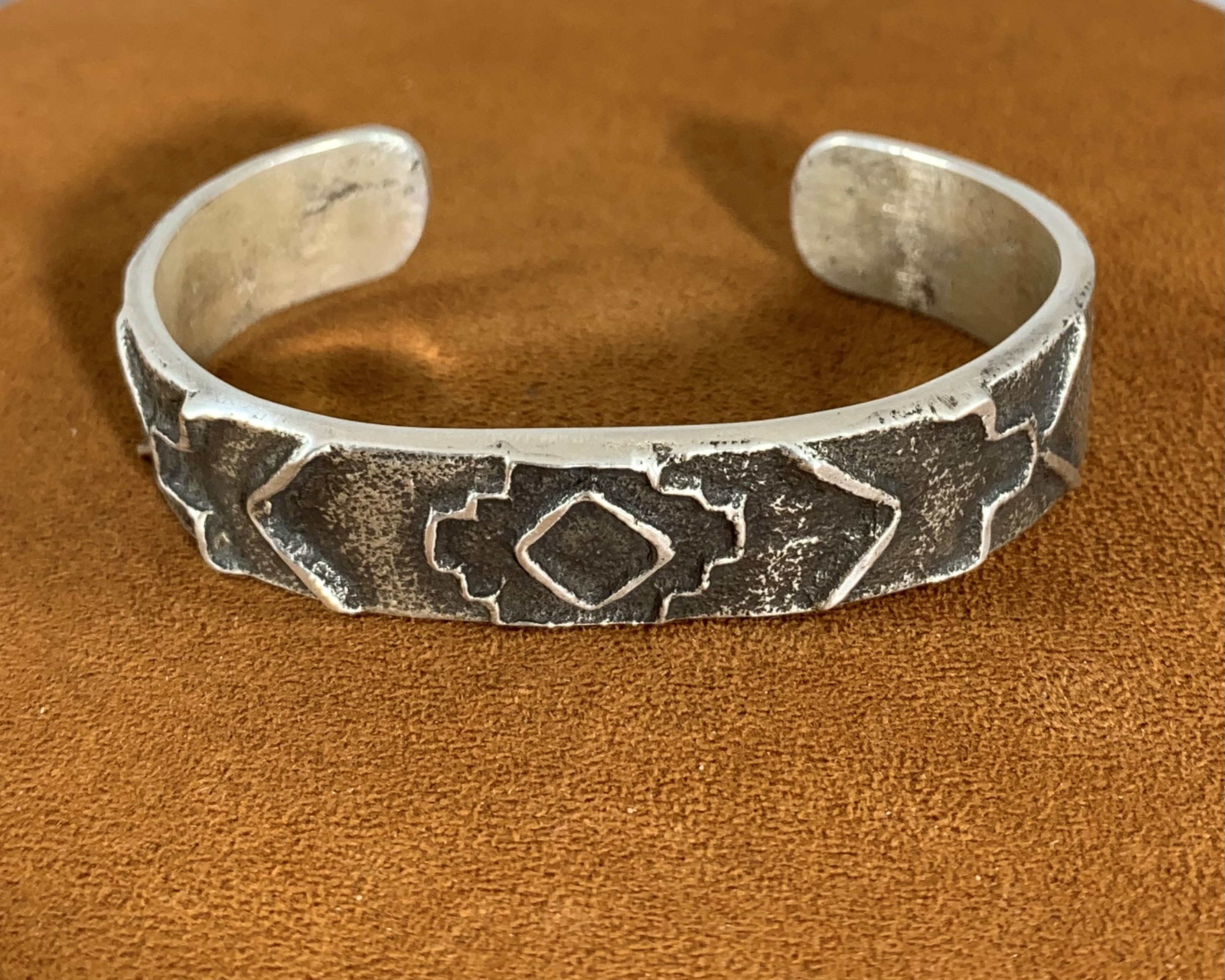 Her Sister Cheyenne, has branched out into her own style while also maintaining the importance of incorporating traditional images. 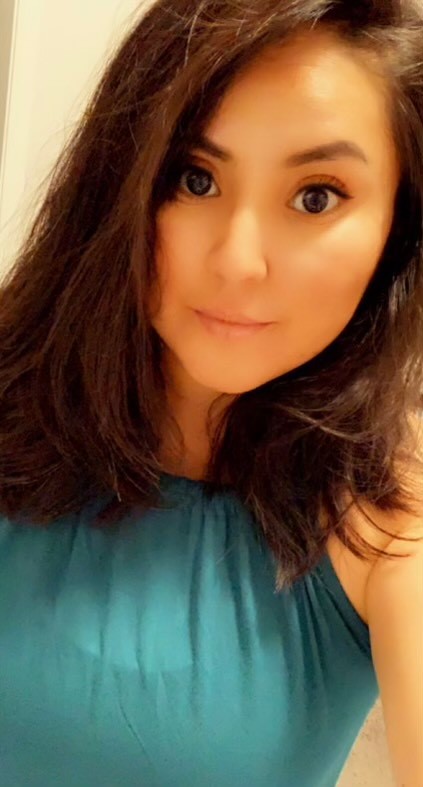 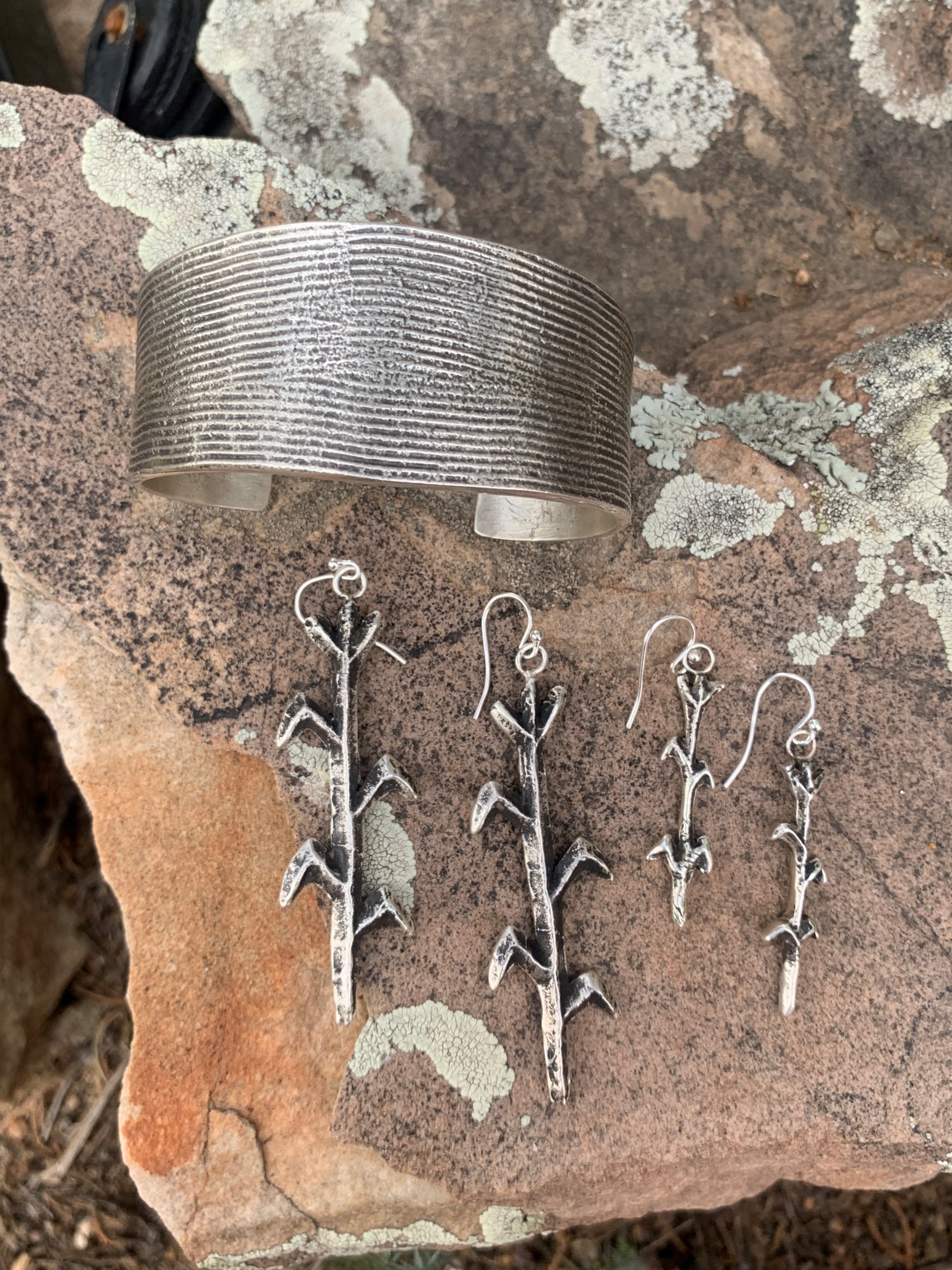 Corn, a symbol of life, fertility and promise dominates the above designs.

In the cuff she depicts what a bird sees when flying above rows of corn. These Rows are apparent on both the inside and outside of this sterling silver piece.

Her sterling silver cornstock earrings are reversible. They can be slid off the hook and turned around, Two earrings in one!!

Other reversible treasures of hers are these sterling silver dragonfly dangle earrings and pendant. 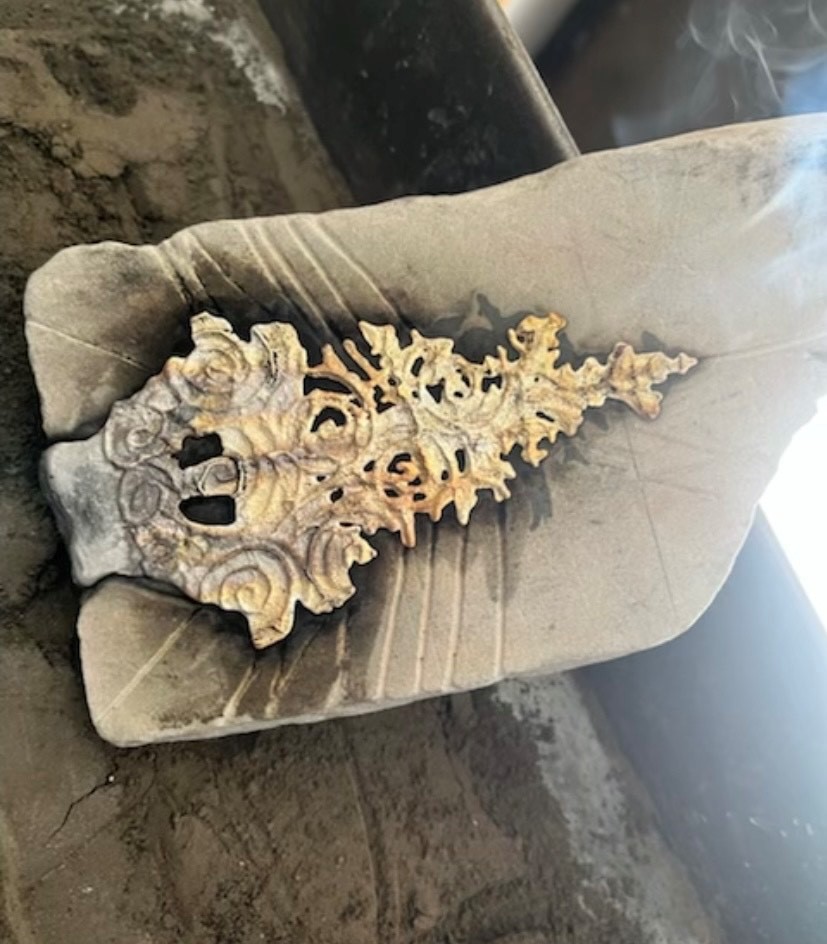 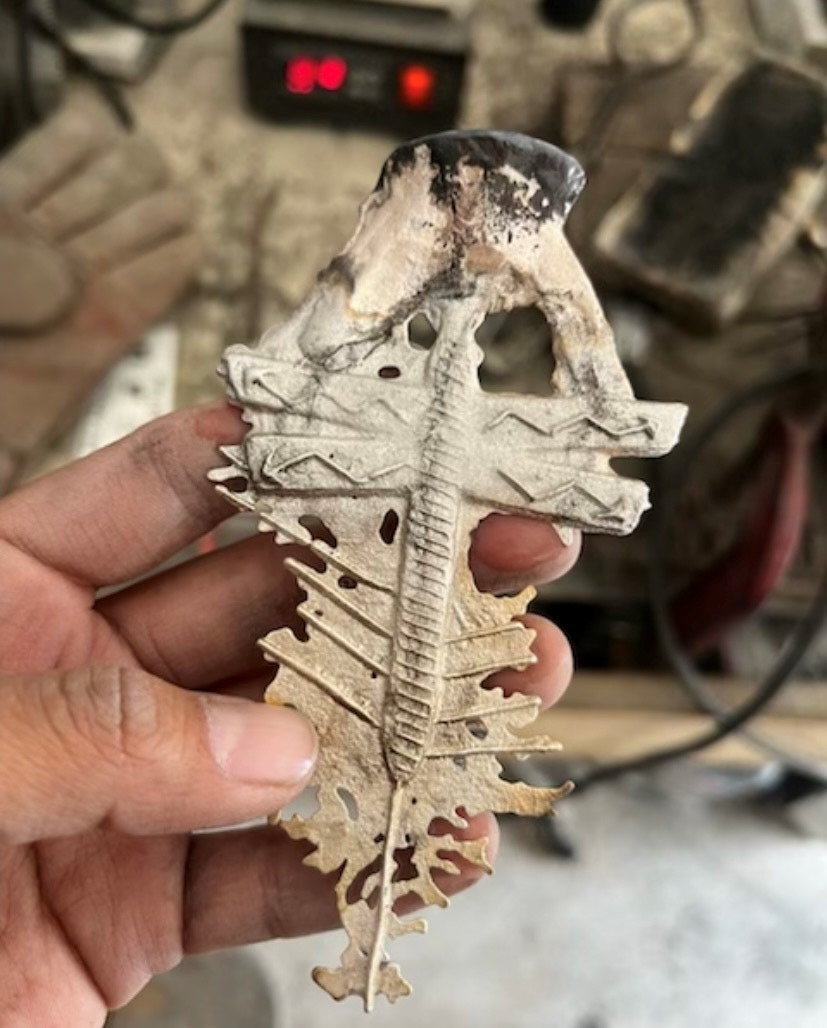 (Dragonfly after Silver has cooled before cutting off extra) 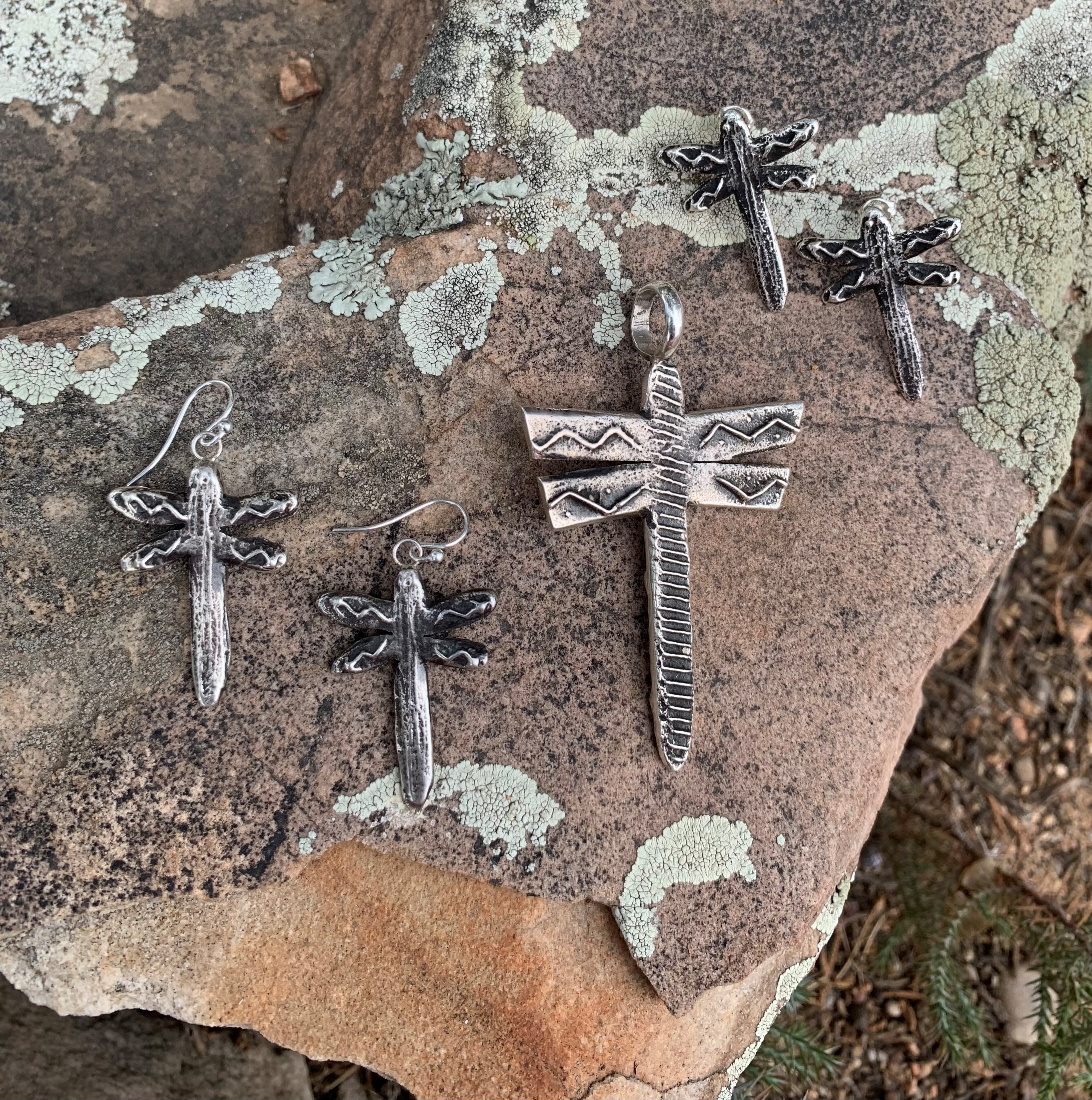 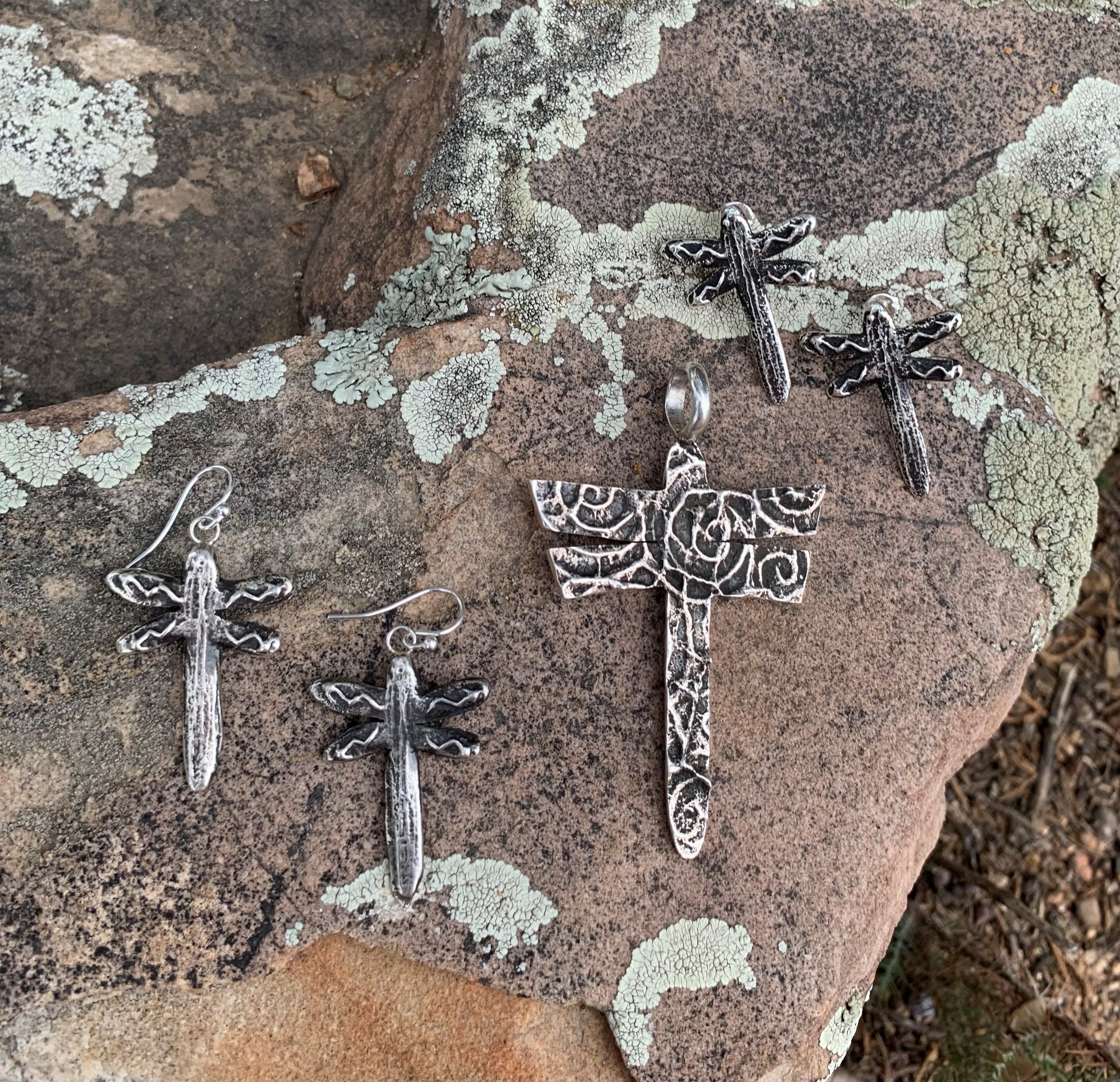 The most magnificent and artistic piece we have from Cheyenne, however, is this amazing necklace. 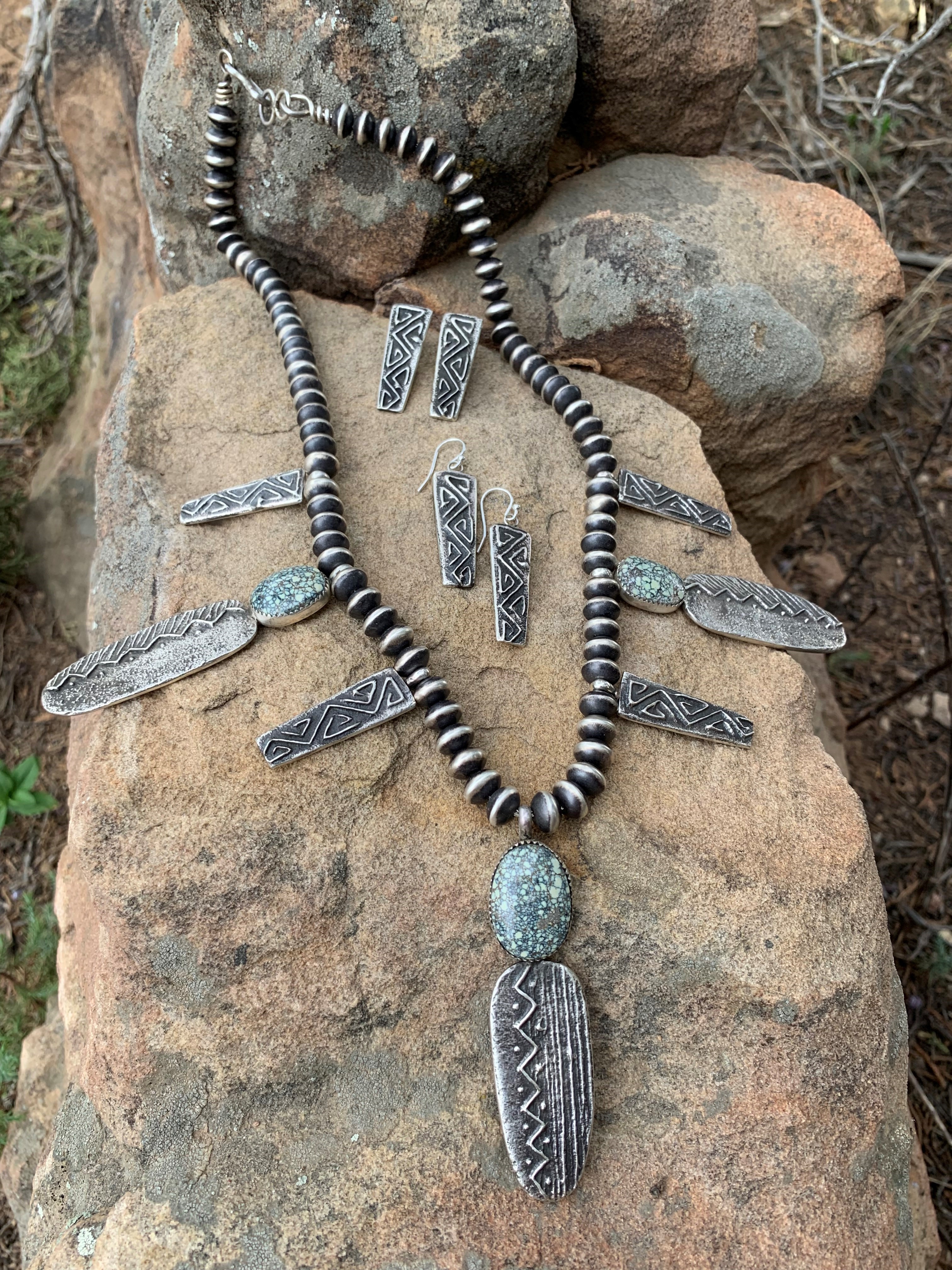 She fittingly refers to it as, “The Maiden Monsoon Necklace.” The lovely New Mexico monsoon is the stormy summer weather pattern we pray to be blessed with every year. This necklace is a perfect fit for this summer particularly, as every afternoon seems to end with gorgeous lightning, magnificent clouds and much needed rain.   It features handmade sterling silver beads with sterling silver monsoon maidens sporting variscite faces and Wearing a Dress of Rain and Lightning. Lightning adorns the spaces between the maidens.

The above are only a few examples of the numerous Custer Family items we are honored to carry. We invite you to click on the links above and or visit our website, www.ortegasontheplaza.com to view more pictures of the Custer Legacy.